At four in the morning on the 31st of August 2016, I flew out of Manila; at a quarter before six, we were hovering over the mountains of Mindanao. When a sliver of morning light illumined the serene landscape of Davao, welcoming me to my new mission, I said to myself, “This is gonna be exciting!” Across from my residence two days later, a bomb exploded.

I was horrified. It was around 10:30 in the evening. The sound of the blast reverberated at every nook and cranny of Ateneo de Davao University. It came from a portion of Roxas Avenue, the massage area of the Night Market that opened at 6:00 PM and closed at 11:00 PM.

On a Friday night, the long rows of food stalls with makeshift tables and monoblock chairs were always full of people. The food was very cheap: a glass of lemonade was at Php 10.00; a stick of barbecue with rice is around Php 20.00. For people on a budget, the Roxas Night Market was heaven. Except on that Friday night on the 2nd of September: that street was hell.

From my room on the top floor, I heard screaming and saw frenzied movements on the street below. I took photos of the AFTERMATH: people were running in every direction; some froze in shock; bodies where strewn all over the place. Tables and chairs were overturned, and I could see some blood on the street where a few minutes ago massages were offered to the weary.

(WARNING: Some photos are graphic!)

For a moment, time stood still. Then I heard the sirens from police cars and ambulances. A fire truck skidded on the parallel side of Roxas Avenue. The street had an island of trees at its center. Some civilians with cars helped bring those wounded to the hospitals. Later, ambulances would field bloodied survivors to other hospitals, while those who sustained minor wounds were admitted to the Ateneo’s clinic.

But those who did not make it remained where they were. The scene had to be examined untouched. In less than an hour, the area was cordoned off. It seemed that those who were valuable witnesses but were not wounded, were asked to stay. Those outside of the crime scene were asked to leave.

Ateneo de Davao locked down the whole campus immediately. No one was allowed to go out of the buildings or to go into the cordoned area. I was, at this time, on the ground floor taking these photos that you can see below, which I also uploaded on Twitter (@jboygonzalessj). 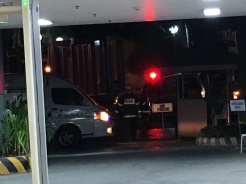 At around 11:30 PM, all we knew were unconfirmed numbers: 30 or more people were being loaded into ambulances; the dead count at this time was nine. But I knew the numbers would increase in due time. People were shocked and traumatized. One student asked me in disbelief, “How could this happen? This is a peaceful city!” I was (and still is) a priest, and I had no answer.

It took some hours before I saw government officials on the scene. The fault was mine: I was new to the place, so I could not identify officials who could have been there before this first photo I took of an obvious public leader. What gave him away was this: media practitioners rushed to interview him. He was, I learned, Vice Mayor Paolo Z. Duterte of Davao City.

Sad and disillusioned, I retired to my room at 2 AM, a few minutes before the President came to visit. I knew he was in Davao then. But I wasn’t interested: the night was cold and quiet. The body bags had already been brought to wherever they should be. Only the media, police and other forces particularly concerned about what had happened remained. But the quiet was not peace. It was the eerie quiet of those traumatized and in shock.

It would take time for people to re-imagine Davao now. What seems to be immune to violence under the President’s protective arm has been infiltrated under his nose. The Davao blast then challenges his promise of peace to his people. Will he be able to keep his word?

But what concerns me now is not about his leadership. The most important thing is how to allay a people’s waning confidence in the present government’s ability to protect innocent lives amidst the President’s all-out war on drugs and the peace negotiations being carried out with militants in the South.

2 thoughts on “Davao Blast: What I saw was our country’s nightmare”