There is truth in the tenet that we should promote our own. Who else could be the best guide but the very people who live in the new place you are exploring. In fact, there is a scripture passage that supports this. Jesus said, “I am the Way.” It means that the best way to get to your destination is a companion who knows the way. The person himself is your very map! Not Waze, Trip Advisor or Google — these are secondary to the very person who is from there!

So, let a local propose to you some places in Camalig, Albay, my very own hometown. These are new spots you would not want to miss. I am so proud that our once sleepy town has many new things to offer, aside from the perfect view of Mayon Volcano especially during eruption, or the iconic Hoyop-Hoyopan Cave. 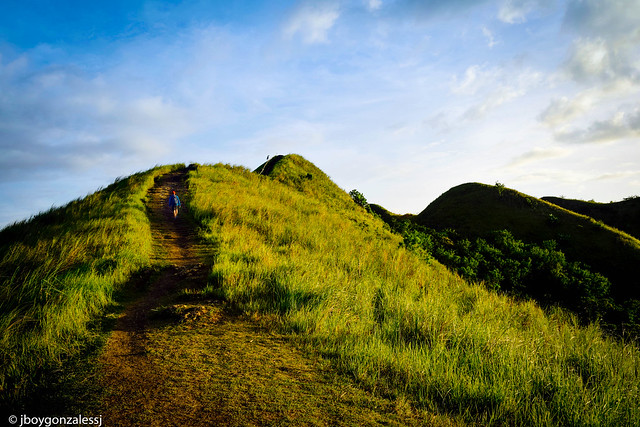 But coupled with this rightful pride is the lingering fear that many government officials will not protect and preserve these beautiful spots, but will move to acquire them for themselves. I heard that present officials have been buying large tracts of land where these spots are. Or that they would welcome industries that threaten the environment like the existing cement factory that quarries some part of the Quitinday Greenhills.

Train your eyes further down to the horizon and you will see a white slice of a hill, like half of Starbuck’s Dome Cake. There are still no legal regulations in terms of the protection of these natural reserves in Camalig. Development to me is a two-edged sword. Despite its positive connotation, it could also mean its negative, the unscrupulous destruction of nature and the greedy acquisition of real estates.

One Instagram caption says it all: “Better go there before it disappears.”

Anyways, if you desire to go to these places, you can just rent a tricycle from downtown. There is a tricycle terminal along the LCC Supermarket or the 7-11 store at the local palengke. Negotiate with the drivers. Only the heavy duty ones can take some stony roads and so long a trip.

The outline of this post follows the itinerary I followed to these beautiful spots. And please carry a bag for your garbage.

The trip to Quitinday is usually a half-day affair, so rent is pegged at Php 500.00. The driver will wait for you as you take your time enjoying each stop. I was with my cousin, Willy, who has been to these new places long before I knew about them.

We left the town proper at around 1 PM and arrived at this river after 45 minutes. We crossed this river before we got into Quintinday’s cave and canyon. This river flowed on numerous shallow pools of clear water where children — and you — could swim. 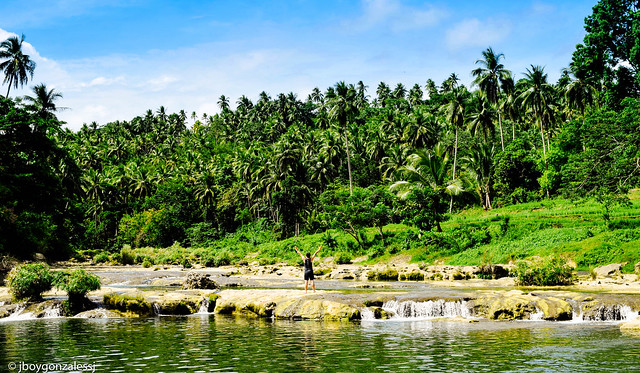 You could of course take a dip, but it would be better if you just take a photo like what I did. Reserve your swim to the next stop.

There were preliminaries before we were allowed to go to the cave, canyon and waterfalls. We first registered and paid an entrance fee. The government trained locals who were available at the registration hut if you needed a guide. The guides — mostly young adults — claimed they could not charge a fixed rate. So, just give according to your right judgment and most especially from your generous heart. We did. 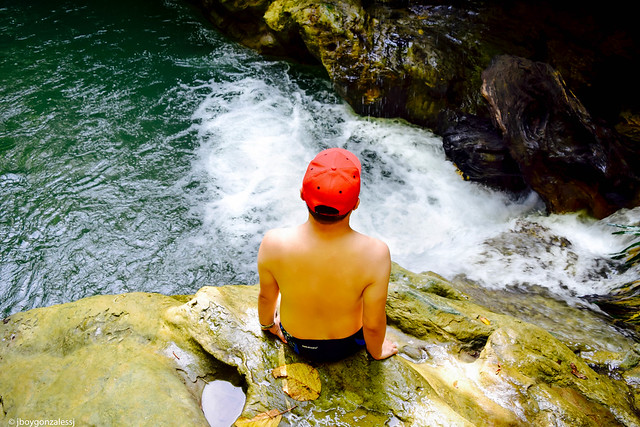 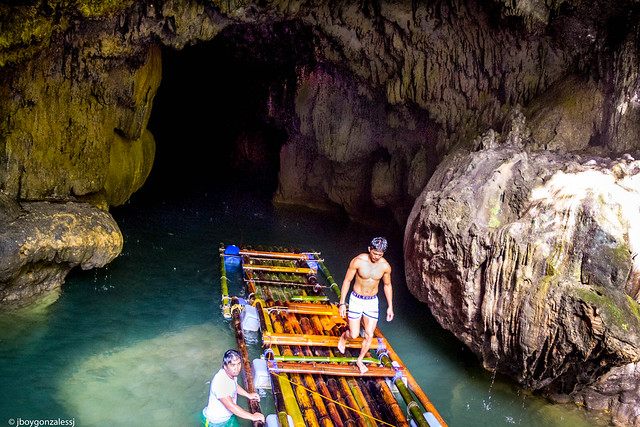 The underground river was a surprise. I never knew there was a small river that entered a cave, would drop to two cascading levels into the dark interior, and then flow smoothly underground and exit into a canyon. It would then fall again to a magnificent waterfall called Sigpit Falls. 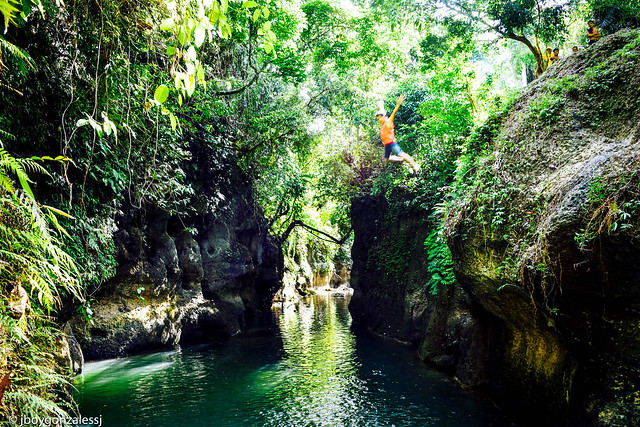 To get there, we descended a canyon, the steps marked by bamboo rails. There were two bamboo rafts that took us to the cave. The trip into the cave to the waterfall was around 15 to 20 minutes. The guide would then ask everyone to climb the waterfalls to an opening where you could spend time to swim. 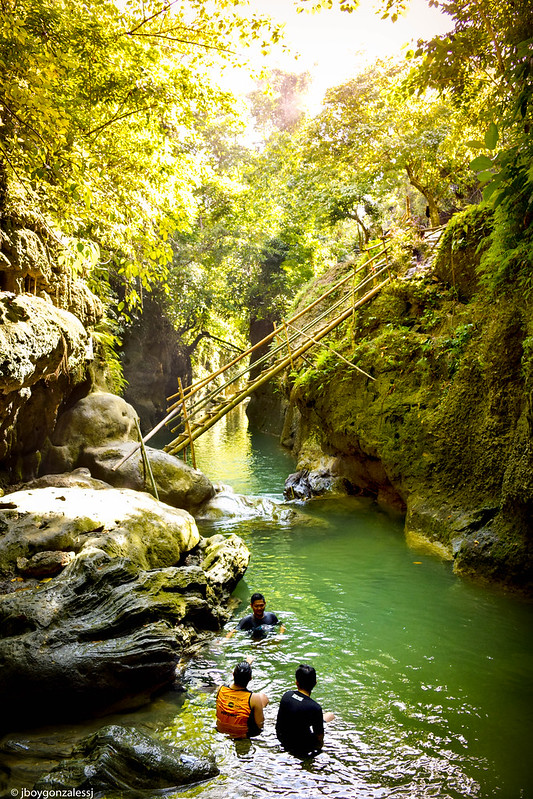 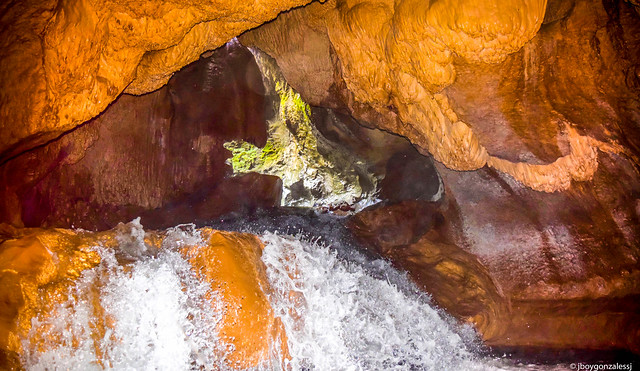 When done, you can either return to the rafts or you can climb up to the top of the cave to enjoy a sprawling rice field. We took the latter and then followed the trail that took us to Sigpit Waterfalls.

A short walk from the cave area was Sigpit Falls. We enjoyed the stream before it cascaded down two tiers below. But that’s where I stayed put. I had no intention to descend to the basin. 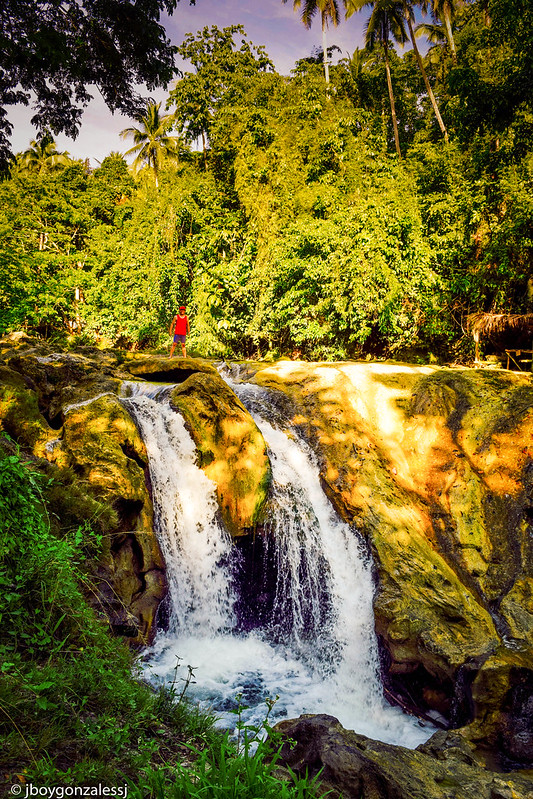 Though my cousin wanted me to go a little further onto the rock for a great photo, I was afraid to do so. So this was the closest I could get to show you the water’s drop to a clear blue basin. But I did not dare jump into it: my fear got ahead of me rather than my daring nature. Our guide said that you could, because he had done it several times. 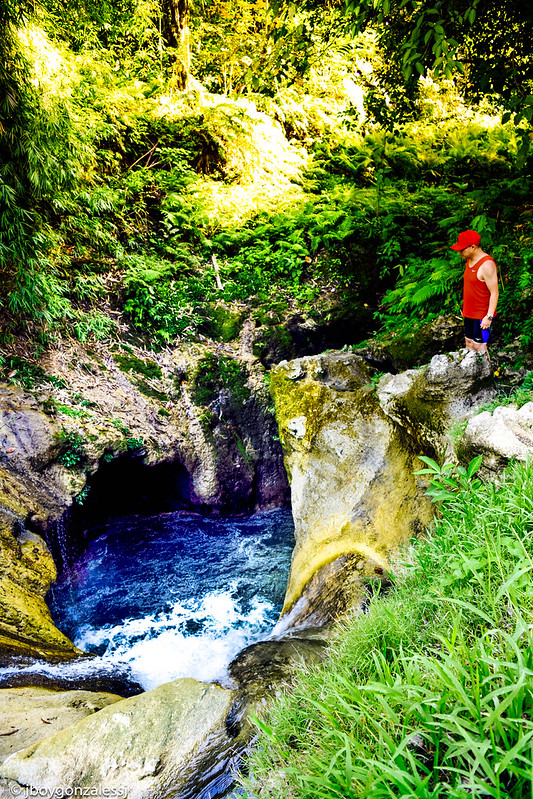 We left this area at around 4:30 PM. My cousin said that the late afternoon is perfect for Quitinday Green Hills. The trip to the hills was around 30 minutes because the route skirts between the hills until it reaches the registration area. I was worried that it was getting dark at around 5:15 PM, but my cousin assured me that the hilltops would bask in the afternoon sun.

Among the new things to explore in my hometown, this was definitely my SHOULD. I found the hills breathtaking. It was awesome to see mounds of earth like that of the famous Chocolate Hills of Bohol, but in my town, the hills were covered with yellow and green with a hue of red from the blades of fine grass. 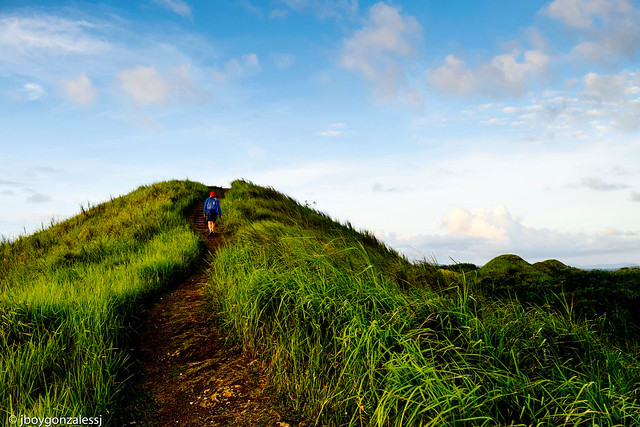 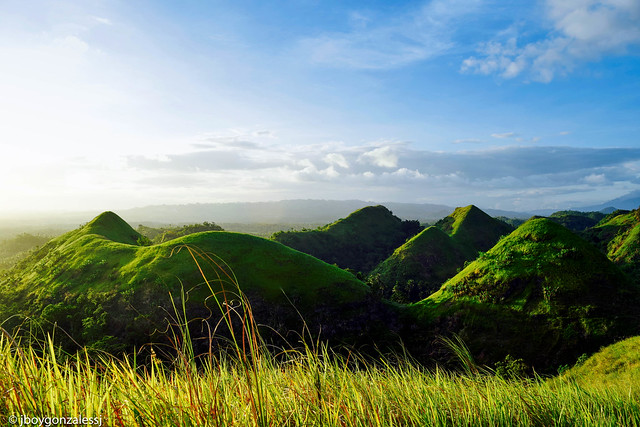 After registering and paying the maintenance fee, we climbed the uphill trail that led us to a certain vantage point where I saw Mayon Volcano at the horizon. It was indeed a must-see for Instagrammers and travel enthusiasts. 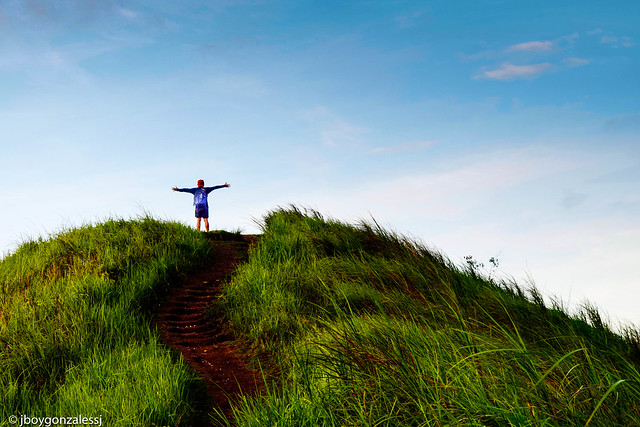 A word of advice: please do stay until sundown. These photos would tell you why dusk is the best time to be there. 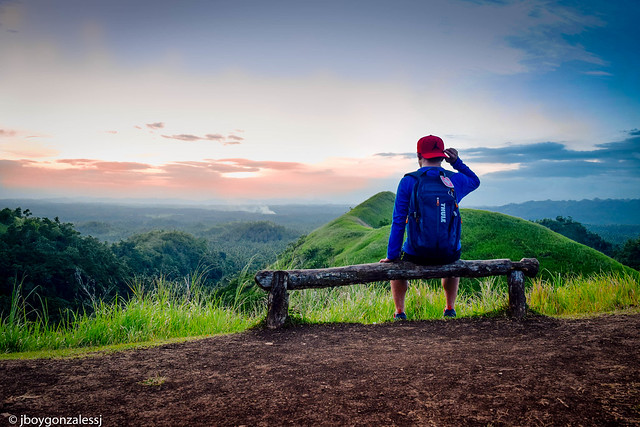 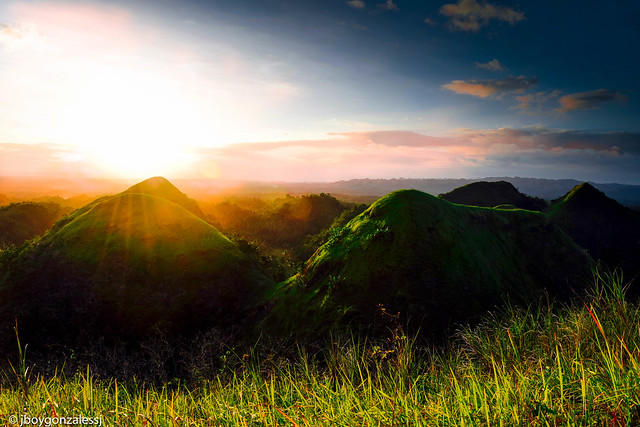 The next day, I headed for Quituinan Hills. Brgy. Tinago was very near the town’s market, so a tricycle ride was around Php 120.00 for a round trip. 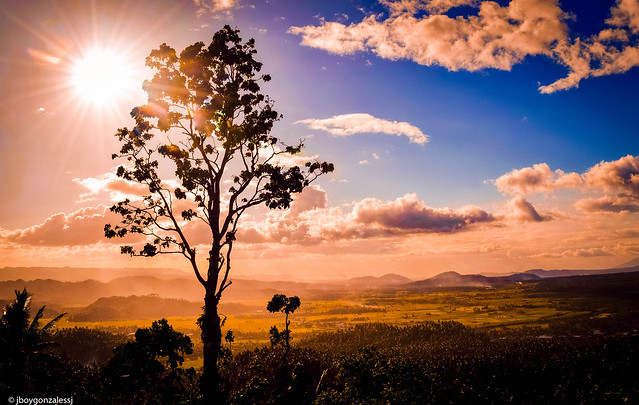 I initially heard about Quituinan Hills from Jesse, my youngest brother, and Yuyu, my cousin. They shared the route of their run every time I was home. But I never imagined the view was panoramic. Just check these pictures. 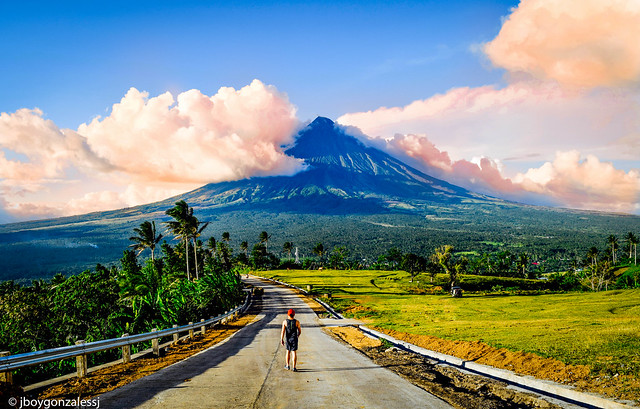 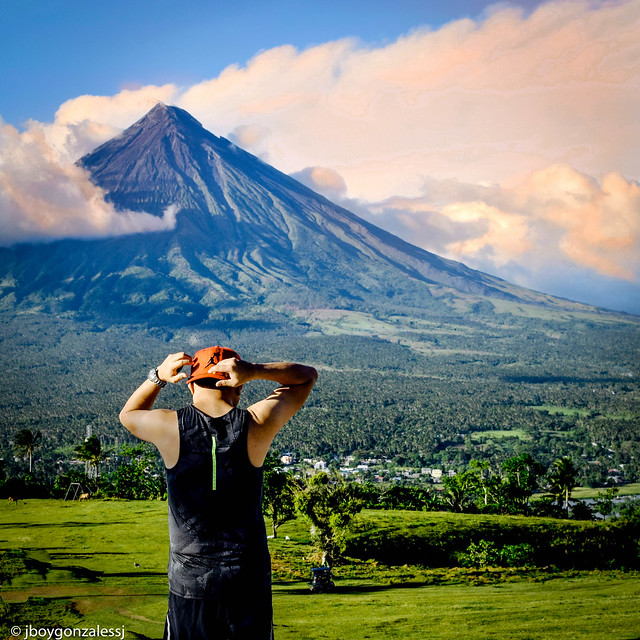 If you only have a day and you are commuting like a solo backpacker, may I suggest this itinerary:

After exploring Camalig, I would recommend the best pinangat ever (we are famous for this dish). Pinangat is made from taro leaves and cooked in thick coconut milk. Like many local fares, the best are in smaller stores. Look for “Kamalignon Pinangat” in Barangay 1. It is along the main street. If you are traveling towards Legazpi City, note the row of pinangat vendors just a few meters from Let’s Pinangat. This row is to your left, so keep your eyes open when you pass by the Municipal Hall and Let’s Pinangat. If to your right, you see Camalig North Central School, you have missed the place.

But the best is again, a local. If you have been in a tricycle touring Camalig’s sights, ask the tricycle driver to bring you to Kamalignon Pinangat, instead of dropping you off at the center of the town.

By the way, Kamalignon is not a restaurant, so it is advisable to enjoy Kamalignon’s Pinangat upon your return to your hotel. If frozen, microwave for around 5 minutes or you can just use the rice cooker to steam it. For us locals, we just put it on top of newly cooked rice — except that your rice will have the juice of taro leaves. But that is perfect for us.

Here is the link:

a. Discover Camalig: a 16th c. town, a lake and food as fiery as its volcano.

5 thoughts on “Quitinday and Quituinan: New Quests for the Curious”