I have a day to spare. After the Jesuit Basic Education Commission meeting about focusing on Mindanao as the way to go for the Philippine Province Jesuits and reflecting on translating into concrete actions Pope Francis’ encyclical, Laudato Si, I decide to explore Iloilo.

I know there is much to see and learn from the city. After the Jesuits’ expulsion from China during the communist regime, they arrived in Iloilo in 1953 to serve the Chinese community. In 1958, Frs. Andrew Joliet SJ and Santiago Leon SJ established the Sta. Maria Catholic School in General Blanco Street at the heart of downtown Iloilo. And when the Philippine Province took over its reins in 2004, the Basic Education campus moved to Mandurriao. The Jesuits renamed it, Ateneo de Iloilo separating the school from the parish. Now, the convent and the parish of Sta. Maria are the only structures that remain in the original location.

I ask a member of the faculty of the Ateneo de Iloilo to give me a day’s itinerary. Here are my adventures.

I leave JBEC’s lodging in Mandurriao at 10:30 AM on a rainy day. After a hearty breakfast and a fast chit-chat with Tito Gus whom I am surprised to see, I take the cab to Molo, one of Iloilo City’s districts. Not even a heavy downpour can prevent me from going where I want to go.

In about 20 minutes I arrive in Molo and the “urban feel” disappears – being in Molo is like being transported back in time. The first thing I see is the Convento de Molo, the living quarters of the clergy of the Iglesia de Sta. Ana. The convent’s striking feature is its capiz shell windows in the second floor, supported by a concrete wall with thick posts in the ground floor, typical of ancestral houses during the Spanish Period. My grandmother’s ancestral house looks like it, but smaller in scale.

This is Molo’s Convento taken from the plaza. 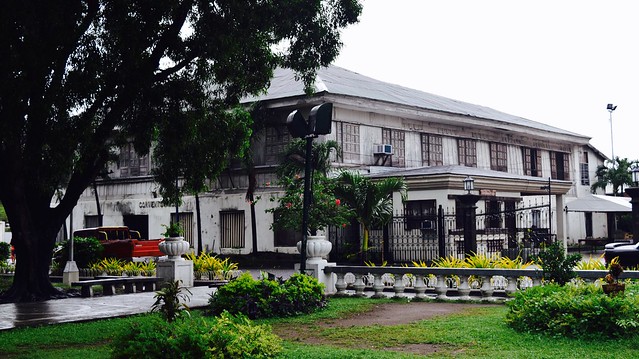 This is the Plaza de Molo. 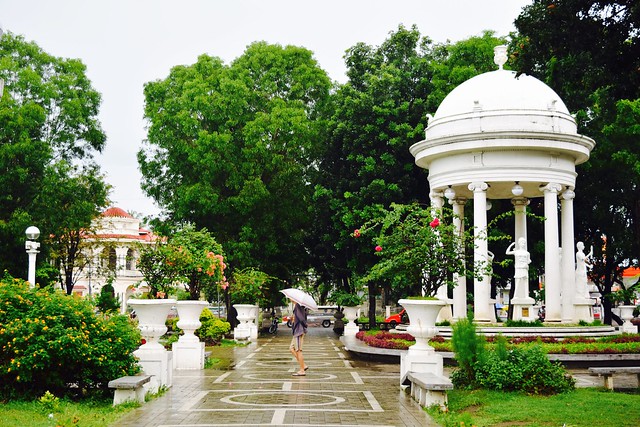 The Iglesia de Molo (featured image above) is dedicated to St. Anne, the mother of Mary. It is the only Gothic church found outside of Metro Manila. Made from white coral stones, it has a huge wooden door and its ornate spires point towards the heavens. Imposing and grand, it is stunning.

More than a century ago, our hero, Dr. Jose Rizal went here on his way to his exile in Dapitan in Mindanao. He wrote this in his diary:

“We went to Molo to see the church painted by a lad who left the locality. Outside, the church is pretty; inside, it is adorned with paintings, mostly copies of biblical scenes by Gustav Dore.”

An array of women saints adorns the interior of the church. They are set on pedestals leading to the altar. They are the very reason why the church has the reputation of being a “women’s church.” Some of my favorite women saints are there: Sta. Ines, the patron of my grade school; Sta. Clara and Sta. Teresa; Sta. Magdalena and Sta. Monica. When I affectionately gaze on particular saints such as the images of Sta. Monica, St. Augustine’s mother, and Sta. Anna, the Blessed Virgin Mary’s mother, I remember my mother. The lives of these women tell me that we can become saints by being faithful to God’s specific call for us — whether as a parent, a worker, a student. Holiness is an everyday ‘business.’ We do not have to have a life-altering experience or a dramatic death.

This is the interior of the Parish of St. Anne in Molo. 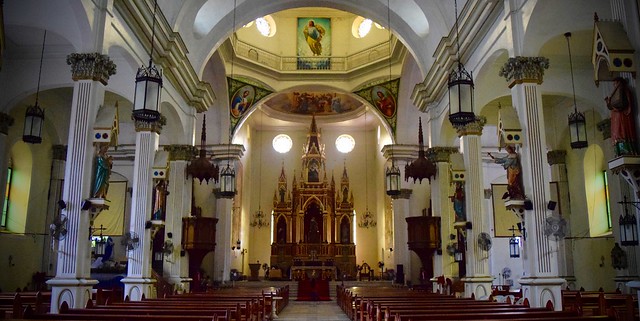 The women saints will direct your gaze to the altar and then to a central retablo with an image of St. Anne teaching the Scripture to Mary. Above the retablo is a dome with a painting of the Pentecost, with the Holy Spirit in the form of the dove providing a central focus.

I see a woman on her knees praying near the altar. This is  her and the altar’s retablo. 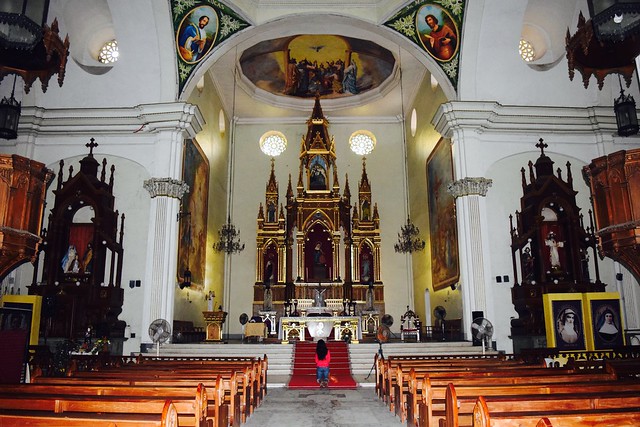 The skies are dark and gloomy as I emerge from a side door. I do not have the luxury of time to wait for the rain to completely stop. There is much to be explored. With a little patience in waiting, the downpour becomes a drizzle. I then head towards Robinson’s Supermarket to buy an umbrella. I need to protect my camera while taking pictures.

It is already lunchtime, and I am excited to try Ramboys, the famous Aklan liempo. Unfortunately, the waitress informs me that the least they serve is a kilo of pork barbeque. I decide not to dine to save my heart.

A local directs me instead to the Molo County Bakeshop for their best Pancit Molo. I took a Villa jeep to get there. Below is a photo of the Bakeshop.

There I order two bowls of Pancit Molo, one in chicken and the other in pork. Both bowls plus the pan de siosa are inexpensive! 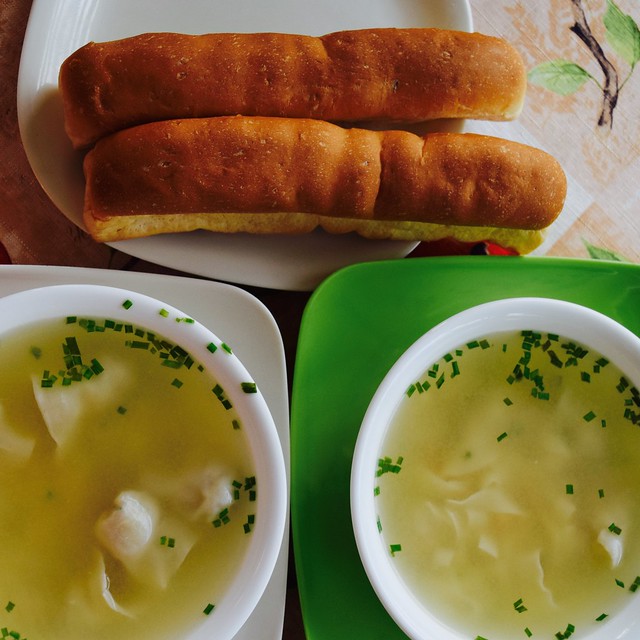 From the Plaza de Molo, I take the Baluarte jeep to Roberto’s in JM Basa Street (Calle Real) in downtown Iloilo. In the past, I would always walk to Roberto’s Siopao from Sta. Maria Parish in General Blanco Street.

Below are photos of the historic colonial building in Calle Real, Roberto’s restaurant (a typical Chinese eatery), and the Queen Siopao. The yellow colonial buildings that mark Calle Real and the adjoining streets such as Iznart, Aldeguer and Guanco were constructed during the Commonwealth era and had been declared historical sites by the National Historical Institute.

The home of the famous Roberto’s Queen siopao, the best in the world, is in this particular building along Calle Real. 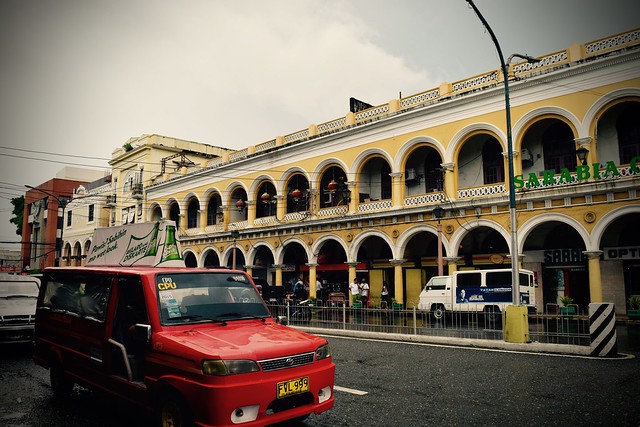 This modest restaurant bakes the Queen Siopao only on Thursdays. I am lucky that it is available even on a Wednesday. 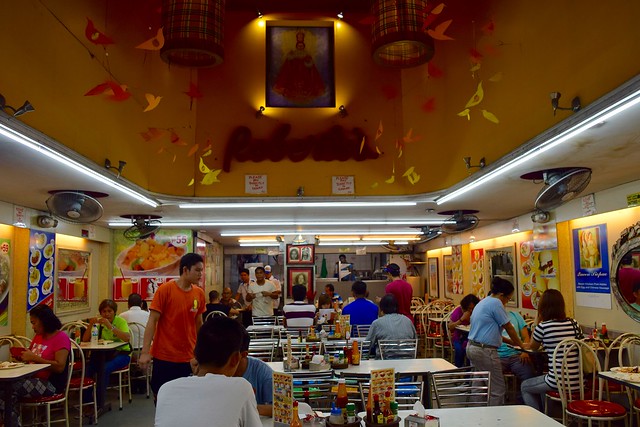 The Queen is stuffed with Iloilo’s chicken and pork adobo, Chinese sausage, hard-boiled egg, and bacon. 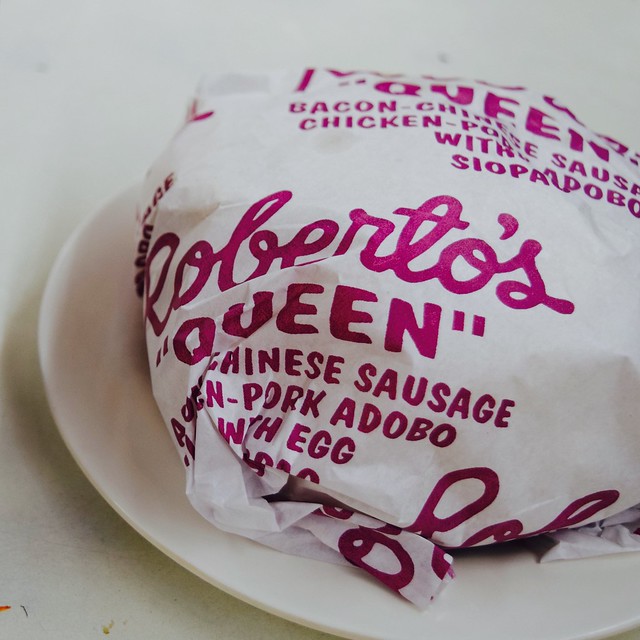 The serving is very generous. 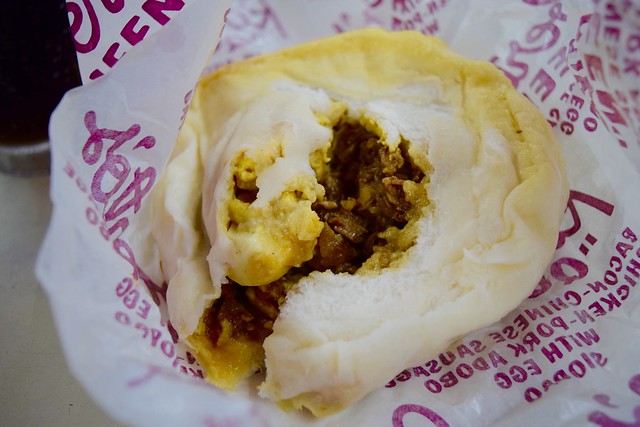 From Roberto’s, I cross the street to take a jeep to Iloilo’s Capitolyo. (You can actually walk to the Capitolyo on a sunny day.) But since it is raining, I’d rather take  a public transport than get soaked. Here is Iloilo’s restored Capitolyo or the Casa Real de Iloilo. It is the old provincial capitol, the seat of the civil government in 1901 and used by the Japanese Imperial Forces in World War II. 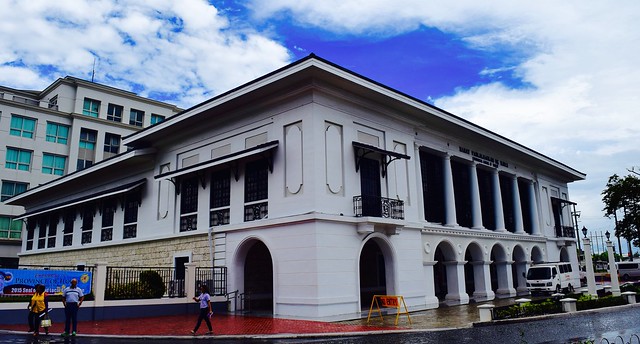 From the Capitolyo, I ask a police officer if it is possible to walk to Jaro. He laughs with great amusement. To him, I am a Filipino, I speak the dialect, but I do not know that Jaro is way too far! The police officer directs me to CPU Jaro jeepneys plying the same street. He tells the driver to drop me off at the Plaza de Jaro or the Graciano Lopez Jaena Park, and instructed me to cross the plaza to the Cathedral. After a brief grateful goodbye to him, I take the jeep. With only Php 7.00 as fare, I reach this Cathedral dedicated to Our Lady of Candelaria. Here are the photos. 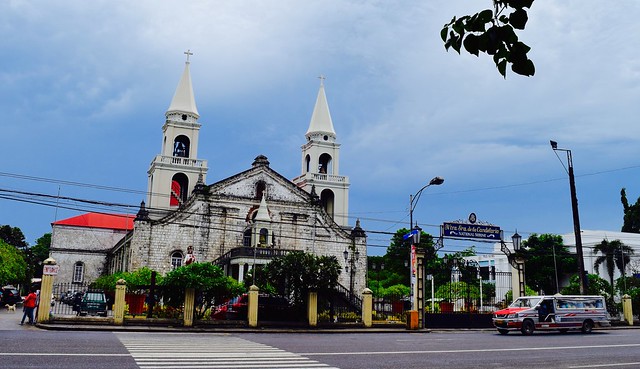 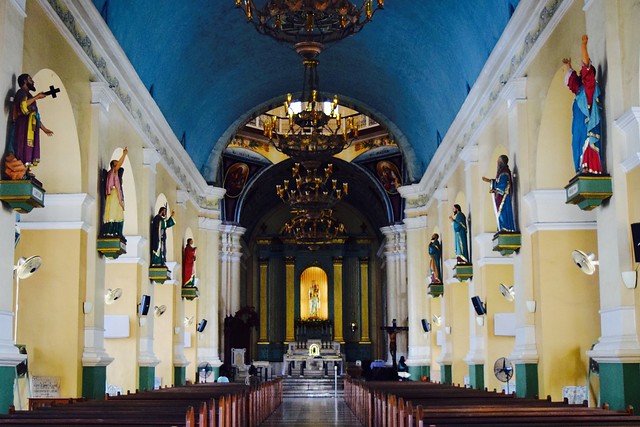 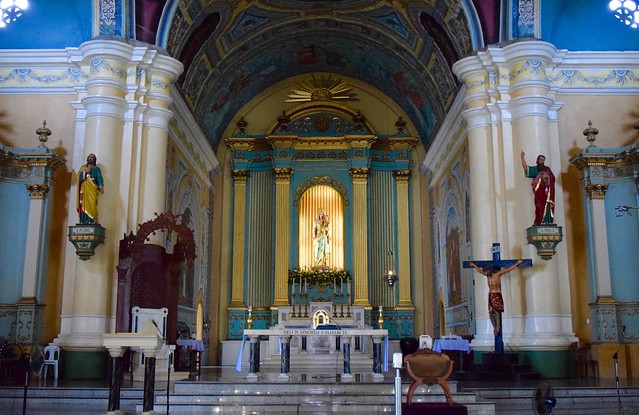 This is the Campanario de Jaro located at the Graciano Lopez Jaena Park. It is the only bell tower that is at a distance from the church in the locality (There are many bell towers especially in the Ilocos Region like this). A marker states that it was also used in the past as a watchtower to warn townsfolk to flee from marauding Moros who seized towns and enslaved their women. 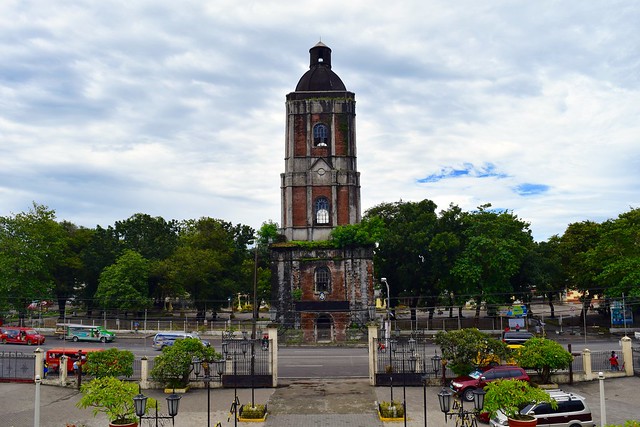 From Jaro Cathedral, I return to the plaza and take the jeep to Ungka terminal for the municipal town of Sta. Barbara. Last 12 June 2015, President Noynoy Aquino celebrated Independence Day there, commemorating the first time the Philippine flag was raised outside of Manila. 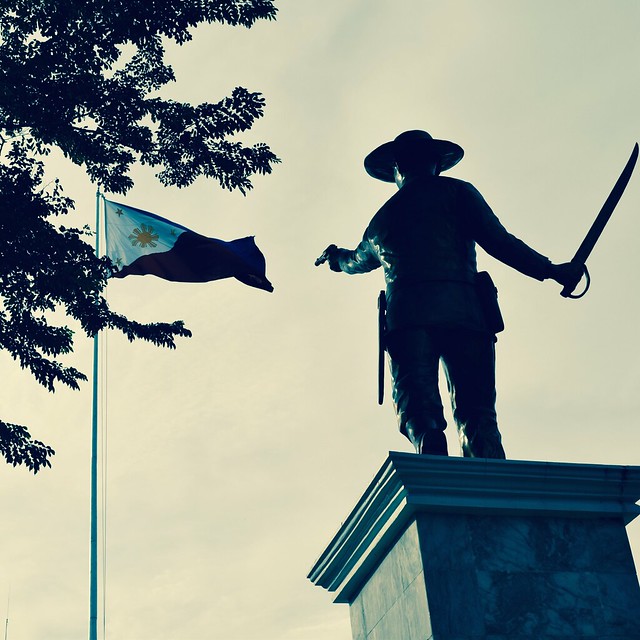 I look at my watch. It is 3:15 PM. I first head to the Sta. Barbara museum. I am afraid that it might close soon. I know that the Sta. Barbara church and convent will close at dusk, after the last mass at 5:00 PM. So, the museum should be my first stop. Fortunately, it is open. Stella, one of the curators, is still in the office. She is very happy to bring me around. She knows that the JBEC delegation have been there last Sunday, 6 September, a day prior to our meeting. I arrived the day after, so I missed the tour of Sta. Barbara. But without regrets: I would rather be alone than with a company. I would love to enjoy Sta. Barbara’s rich cultural heritage at my pace, in my own time.

One of the displays of the museum are different traditional dresses worn by people of a bygone era.

Get to know more about Sta. Barbara in the next blog entry. With the numerous photos I have, I decide to dedicate a post just for Sta. Barbara and the restoration work the National Historical Commission of the Philippines (NHCP) has done to preserve the town’s historical sights. Here is the LINK.

5. Iloilo’s Business District and its walkways.

Returning from Sta. Barbara, I tell the driver to drop me off at the esplanade of the Iloilo River. This esplanade was opened on 18 August 2012. Since then, it became a haven for lovers and joggers alike. 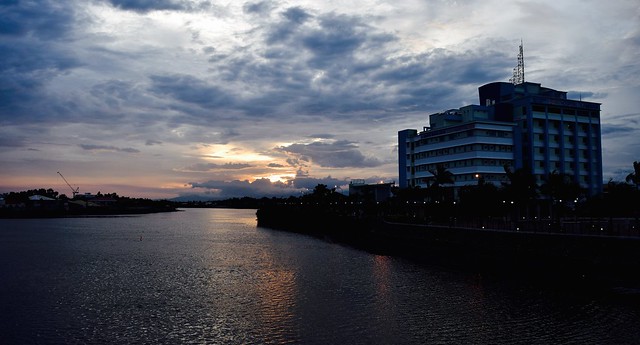 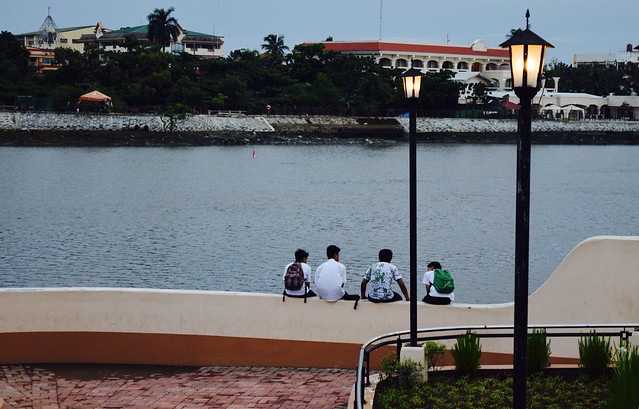 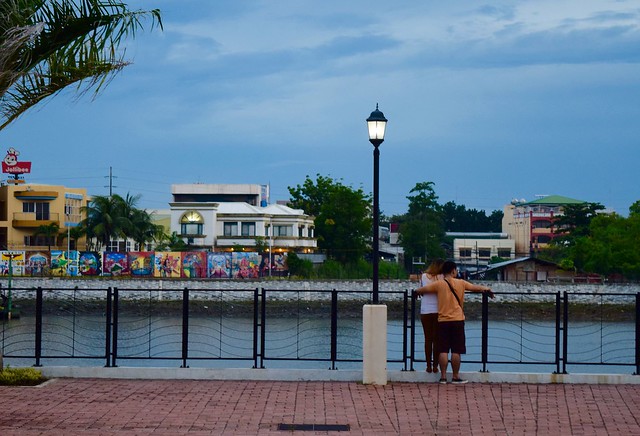 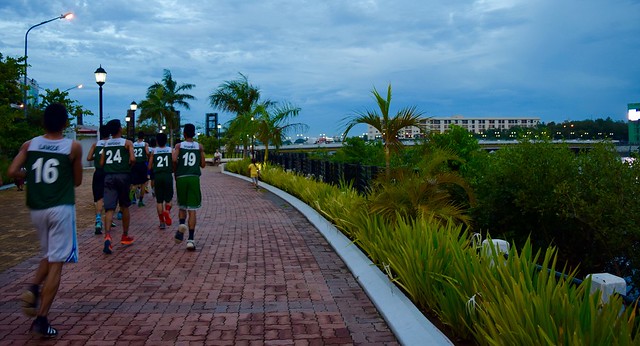 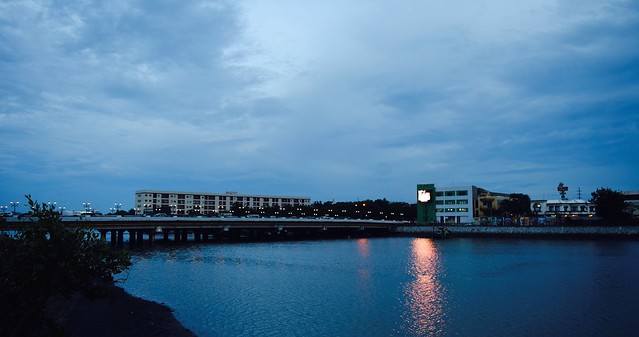 Two of the things that you will notice about the business district are its bicycle lanes and sidewalks. There is a bicycle shop that rents bikes. They say that they are hoping to develop a bike culture in Iloilo. 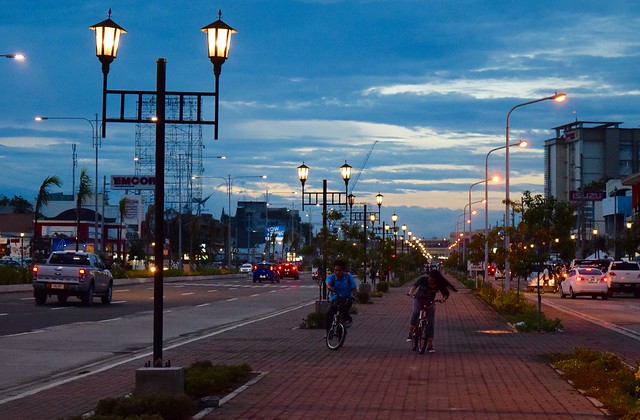 A short walk from the esplanade to our hotel is the Samurai Talabahan Restaurant where you will get these cheap seafood eats. These baked scallops and spicy oysters end my day’s tour. 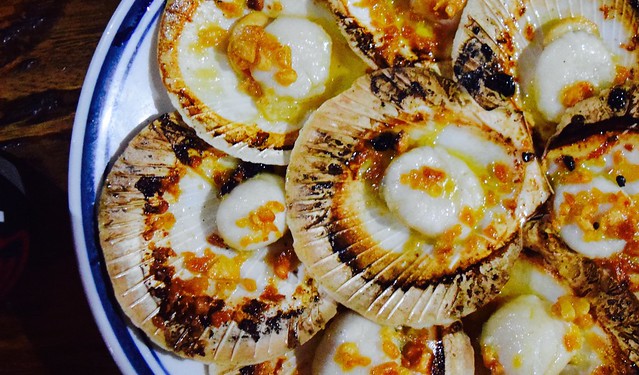 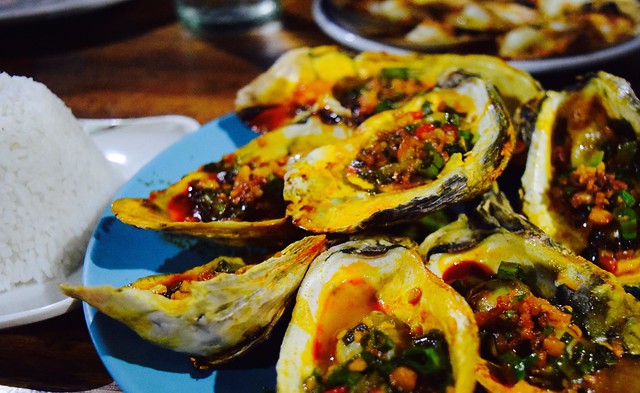 I hope you too will also enjoy your adventure. Iloilo is worth visiting, even if it is just for a day.

One thought on “A Day In Iloilo Is More Than Enough”