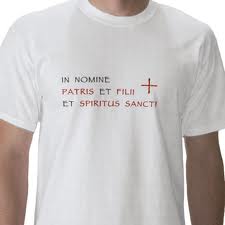 Why do Catholics trace the sign? Many evangelicals have lambasted us. But little do they know that Martin Luther did not abandon the sign of the cross. In fact, he recommended it in his Small Catechism in an appendix on family prayer. It says, “As soon as you get out of bed in the morning, you should bless yourself with the sign of the Holy Cross and say: “May the will of God, the Father, the Son and the Holy Spirit be done! Amen.” (Martin Luther, Luther’s Little Instruction Book, trans. Robert E. Smith)
Well, we, Catholics, are doing what the early Christians were doing as early as Paul. It seems it becomes a practice at baptisms. It was a normal, everyday experience of Christians in the first centuries as attested by many Christian writers. Tertullian (160-225 AD) said, “In all our travels and movements, in all our comings and goings, in putting on our shoes, at the bath, at the table, in lighting our candles, in lying down, in sitting down, whatever employment occupies us, we mark our foreheads with the sign of the cross.”
St. John Chrysostom (347-407 AD), the eloquent saint whose memory we celebrated yesterday, was the patriarch of Constantinople (now Baghdad), said, “Never leave your house without making the sign of the cross. It will be to you a staff, a weapon, an impregnable fortress. Neither man nor demon will dare to attack you, seeing you covered with such powerful armor. Let this sign teach you that you are a soldier, ready to combat against the demons, and ready to fight for the crown of justice. Are you ignorant of what the cross has done? It has vanquished death, destroyed sin, emptied hell, dethroned Satan, and restored the universe. Would you then, doubt its power?” Let us see what he meant.

There is a story about Alexander Solzhenitsyn found in the internet. Alexander leaned on his shovel and watched the gray clouds drag sullenly across the sky. A merciless wind tore at him through his prison garb. He felt as though it penetrated to his soul. Every one of his bones and muscles ached. Hunger gnawed his stomach. Years of hard labor in the Siberian work camp had ruined his health and stripped him of hope.

Alexander could endure no longer. He dropped his shovel, left the work gang, and sat on a bench nearby. Soon a guard would command him to return to work. When he would ignore the order, the guard would beat him to death with his own shovel. He had seen it happen to others many times. “A quick, bloody death today,” thought Alexander, “would be better than a slow death in a bleak, empty future.”
He stared at the ground, waiting for the inevitable. Soon he heard footsteps and braced himself in anticipation of the guard’s harsh words. But when he raised his eyes, instead of a guard he saw a gaunt, elderly prisoner standing before him. The old man said nothing but knelt in front of him. With a stick he scratched the sign of the cross in the dirt and then hurried back to work.
He looked at the cross, and as he reflected on it, a ray of light penetrated his dark thoughts. In that moment, his perspective changed radically. He realized that he did not have to face the evil of the gulag and the Soviets on his own diminished strength. With the power of the cross, he could withstand the evil of not one but a thousand Soviet empires.

He got up from the bench and returned to work. Although the record does not say so, I think that he must also have traced the ancient sign of the cross on his breast. None of Solzhenitsyn’s external circumstances changed that day, but internally he had experienced a gentle revolution. The sign of the cross had blessed him with the grace of hope.

When we make the sign of the cross then, we are not doing an empty gesture. The sign of the cross is an opening to God. It is a prayer itself that engages the Trinity to help us live a true Christian life. It is a renewal of Baptism. When we trace it on our body, it stirs up the new life of the Spirit that we received in Baptism and vitalized our prayer drawing us closer to God. It is a mark of discipleship. Making the sign affirms our decision to follow Christ, allowing Him to assume our burdens and free us to live joyfully. It is an acceptance of suffering. The sign of the cross is a practical tool for dealing with problems. It is a defense against the devil and a victory over self-indulgence. It invites Christ to support us in our pain and suffering and works handily to defuse our worst inclinations and sins and to dispel the temptations of the devil. And the sign is much more, for with a slight motion of the hand and a few simple words, it sums up the truth and power of the Christian life.

In other words, when we trace the sign of the cross, we remind ourselves of our identity and our responsibility: I am a Christian! I am a Catholic! We follow what Paul says in the 2nd reading: Put on the mind of Christ! When we trace the sign of the cross in public, we tell them that we are not ashamed to be branded with the cross of Christ.
Just as St. Paul said to the Galatians, “But as for me, it is out of the question that I should boast at all, except of the cross of our Lord Jesus Christ, through whom the world has been crucified to me, and I to the world… After this, let no one trouble me; I carry branded on my body the marks of Jesus.” (Galatians 6, 14 &17).

2 thoughts on “Why Catholics Trace the Sign of the Cross”