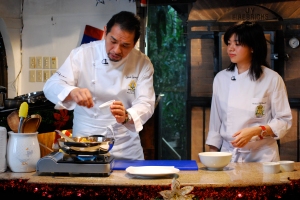 Here is great news: the macho image is slowly being eroded by men who share the chores at home. Studies show that as women eke out a living, their husbands all the more share domestic duties.

And the better news? They do it not begrudgingly, but willingly.

They understand the difficulty their wives experience after work: clean the house, manage the children, cook their meals and wash the dishes. The new generation of dads are aware because they too return home exhausted.

These men care for their wives. So, they naturally establish a loving partnership. Love and courtesy has therefore eroded the traditional regard for gender roles in the house.

In the kitchen arena, men began to fancy themselves more readily with cooking. The rise of celebrity chefs of the Lifestyle Channel like Jamie Oliver, Bobby Flay, Mario Batalli, and Wolfgang Puck inspire many upcoming young couples to enjoy not just eating, but preparing the meals at home. They made frying, grilling and baking fashionably cool.

Why then should dads cook? My twitter friends has these things to say.

A disclaimer first before we proceed: please don’t accuse me of gender bias. But @ellobofilipino said, “the world’s best chefs are men.” He said that chefs are found in world-renown hotels, restaurants and TV shows. A case in point is the most franchised boob-tube phenomenon, Iron Chef.

However, I would like to read @ellobofilipino’s comment as this: the advantage of trying out blanching, beating and boiling helps dad discover a hidden talent that might make him one of the world’s best. You see, cooking is an art. Ask @mrwhitepatch who said that “cooking requires true passion and craftsmanship that only a dedicated person can pull off. And that’s special!”

Second, cooking is one way to actively help build a family together. By mincing, melting and mixing, fathers contribute in making a house into a home. @carlosceldran said that “men should cook so that they feel what is it like to sweat over a hot stove.” Dads are enabled to emphatize with their wives by participation. @murz13 said that it is one of the ways to practice gender equality.

But beyond the issue of gender, couples who do not distinguish which is the man’s and which is the woman’s discover that sharing is about love, more than about rights. @sansrecourse said that a father’s role is “to nurture” the family. And thus cooking is an act of love for his wife and their children.

@iAndWee points out a reasonable purpose: cooking at home can leave happy memories. Her aunt, a widow, recalls that her loving memory of her husband is in the kitchen. @christabellej says it all, it is romantic for women when their husband cooks for them.

It is not a surprise that Aissa recalls a fond memory: “my dad used to make us breakfast, and he’d make pancakes with smiley faces and melt real chocolate shells in our hot choco. He made it special and fun for all of us!”

Third, when dads cook, he “makes things more special” for their children. JA Mendoza shares that her dad used to cook for Sunday lunch. Sundays are special because they all share Dad’s meal together. @bouie said “It’s unusual (and rare) when dads cook. So when they do, the food seems as special as the ones moms cook.”

Mark Ching tells his story: “I remember being late in grade school because I waited for my father to finish cooking my lunch. So when I told my teacher the reason for my tardiness, she asked me, ‘Masarap ba siya magluto?’ My mom usually cooks. But when my dad prepares the meal, it’s something special. He’s a great cook.”

Cooking also inspires children to discover innate talents. @edcolmenares said that his dad inspired him to learn how to cook. He “eventually found out that in their family, the guys cook better.”

Dad’s cooking strengthen the bonds between their extended family. Ed Colmenares adds that “meals are good times to bond with his tito and titas as well as his cousins.”

But most of all, cooking is an expression of love. St. Ignatius of Loyola said in his Spiritual Exercises that “love ought be shown more in deeds than in words.” Here, cooking is putting that articulated love into practice. Sealdi said that she “associate good home-cooked meals” with her dad. He knows all their fave food. And what makes him cool? “Dad is concerned whether ‘we are eating well of not’.”

Maui Salang Dulce sums it all up, “I love it when Dad cooks because he does it with so
much love.”

So a word to all dads: head to the kitchen. Slice. Stir. Sauté. Make soup, stews and sauces.

It’s the easiest way to your family’s heart.

And if you’re lucky, you might earn what you most desire on Father’s Day.

Check out this video clip I made just for this blog post. It is taken from our Christmas special, Kakaibang Pasko by the Jesuit Communications Foundation, Inc (Jescom). It was aired last December 2009 on ABS CBN. The clip is the segment of Chef Gene Gonzales and his daughter, Gianina who also cooks. Gene Gonzalez is the owner of Cafe Isabel.