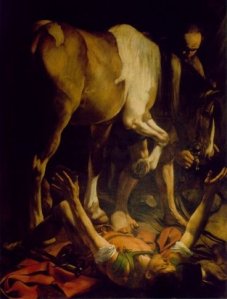 Conversion is intrinsic to our faith. John the Baptist and Jesus began their ministry with a proclamation: “The time has come; the kingdom of God is near. Repent and believe the good news!” (Mark 1, 15). And in Acts, Peter said, “Repent and be baptized, every one of you, in the name of Jesus Christ so that your sins may be forgiven and you will receive the gift of the Holy Spirit” (Acts 2, 28). And of course, Paul have the same battle cry. But today, we will focus on the conversion of St. Paul who was the preeminent apostle to the Gentiles.

Paul’s conversion was a spectacular story. That is why many of us would use the phrase, your “Damascus Experience” to mean a radical change of mind about almost everything. It is a sudden shift. For example, a politician supports a system that was opposed to what he held before. There are many ways to interpret Paul’s conversion or his Damascus Experience. First, an alternation: a gradual change of life that grows out of the past. Second, a transformation: a change of life that re-conceives the past. Third, a conversion: a sudden change of life that rejects the past and takes a new direction. Paul rejected some aspects of his Jewish past, theology and practice that he was considered an apostate in the eyes of the Jewish leaders. All of these would account to a sudden and radical change that turned Paul from persecutor to preacher.

For many of us, we have always regarded St. Paul’s experience as a conversion. His radical shift was due to his vision. And because of this we have interpreted Paul’s experience like Michelangelo’s painting, The Conversion of St. Paul (1542-1545). He had the heavens opened with God and his angels on its fore and a light directly aiming at Paul, that the horse and soldiers fled in fear. It is God directly intervening into history.

But there is a quiet interpretation of his vision which is the interpretation of Caravaggio’s painting, The Conversion of Paul (1600). The painting is simple: it had Paul on the ground with eyes closed, his horse and the caretaker. The horse is just there, the caretaker do not see what Paul sees, and so, they don’t flee. Nothing is happening to the horse and the caretaker, but something interiorly is happening to Paul. Paul is receiving God in his very depths. The painting, unlike the spectacle in Michelangelo, does not have God bursting into the sky; but the viewer sees that God, though not visible, works in the heart of Paul. From his conversion, Paul will incorporate the call to a change of heart; that we who hears the Word of God are summoned to a metanoia.

In our lives, we do have analogous experiences of change. The most of common is a change that involves time and effort and a lot of prayers as an alternation. We reflect on our past and from the past, we learn little by little, tediously moving with difficulty, sometimes like an uphill climb. There are those who have undergone therapy, counseling or spiritual direction that they have re-interpreted the past, and found new meaning in their traumatic experiences as a transformation. And some a sudden conversion after an accident or a deep meaningful retreat. Amidst all these, we acknowledge two very important angles. Whatever change that happened to us has been wrought not only by our sheer will — or else, we have done our New Year’s resolution easily — but, as seen in the paintings of both Michaelangelo and Caravaggio, God has largely been working from outside and inside of us.