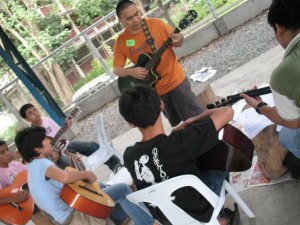 The liturgical celebration of the Chair of St. Peter traces its origin in two great feasts of Christians found in the early martyriology: one on the 18th of January and the other in the 22nd of February. The latter prevailed in the Roman Catholic Calendar. Real wooden chairs having believed to be used by St. Peter himself on his first service in Rome was at the catacombs of Priscilla and another in the baptismal chapel of St. Peter’s Basilica.

In St. Peter’s Basilica in Rome, a wooden chair is enclosed in a gilt bronze casing designed and executed by Gian Lorenzo Bernini in 1647-1953. On the apse is inscribed Jesus’ words from Matthew’s Gospel today: “You are Peter and upon this Rock, I will build my Church and the gates of Hell shall not prevail against it. To you have I entrusted the keys of the Kingdom of Heaven. Whatever you bind on earth will be bound in heaven and whatever you loose on earth will be loosed in heaven” (Matthew 16, 18-19). These words establishes the supreme authority of the Bishop of Rome as both the successor of St. Peter and the Vicar of Christ. This belief is symbolized by the Chair of St. Peter or the Cathedra Petri in Latin. A cathedra is the chair of the bishop: thus a cathedral has on its altar the chair on which the bishop of the place sits.

The meaning of today’s celebration is our recognition of the Pope as the successor of Peter and the Vicar of Christ. To many different groups of Catholics whether they belong to the Eastern or Western church (Roman Catholics are Western), we are all united under the authority of the Pope.

And thus, to push this feast further towards relevance in our lives, we too are called towards leadership. We teach our families or a group or an organization. We head a corporation or we occupy a position in the government. How do we exercise our leadership? Are we leaders who use our power to manipulate and control others? Are we the type whose main concern is the preservation of our status more than our function? Or, are we leaders, patterned according to the disciples, who genuinely serve others and whose faith stand like rock?

Think about this. A janitor posed a question to Ted Failon in DZMM. He said that he is so poor that more than just once he considered stealing. What prevents him is the shame he will bring his family; his name will be tarnished forever. Stealing is something one keeps to himself. Why is it that people in our government steal publicly? And why would they steal when they are already filthy rich?

* Aris Tuazon teaching guitarists from Payatas and Sapang Palay in the Liturgical Music Workshop of the Jesuit Music Ministry. Aris is also a flutist and a drummer; a member of Musica Chiesa, an ensemble of musicians who play at the 11 AM Sunday Mass in UP.