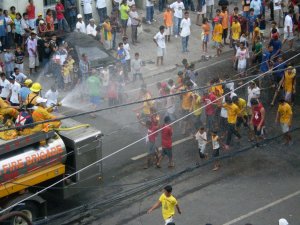 There is a play written by Peter Shaffer called Equus, which starred the famous Daniel Radcliffe of Harry Potter. The play is about Dysart, a psychiatrist who attempts to treat Alan Strang, a young man who has a pathological fascination with horses. The family background of Alan Strang is our concern: he grows up in a conflicting home. His mother was a devout Christian who reads to him the bible, while his father was an atheist who burned Alan’s picture of the crucifixion of Jesus and replaced it with the picture of a horse. Eventually, Alan blinds six horses at a stable where he worked; Dystart links Alan’s action with his family upbringing.

The first reading gives an ancient account of senseless action. King Belshazzar gave an extravagant party, but upon the influence of alcohol, decided to use the gold and silver vessels of the Temple of Jerusalem for his party. Nebuchadnezzar took them from Jerusalem after the siege. And his son, King Belshazzar used them as vessels for a spur-of-the-moment party.

Or, we can take Jesus’ warning in the Gospel: whoever follows him would be ‘handed over’ by his family and friends. A person who follows his heart despite parental objections, heeds his conscience, but endures the anger of his parents or friends. A teenager leads an amoral life, rebels against the ‘world’, or acquires a pathological condition because of conflicting beliefs and training from parents like the plot of Equus. Our senseless action may create, lead or form a lifelong psychological issue.

There are times when we regret and resent ourselves for doing many stupid, senseless and unthinkable things in the past. And many of these were done under the influence of alcohol or a state of extreme emotion. For example, when we bully and gang up on a student who rejected our invitation to join a fraternity, we resent having doing it. Usually negative emotions like anger control our rationality.

Today, as we approach the end of the Liturgical Calendar, we can reflect on our decisions in our lives. The objective is not to condemn ourselves, but to straighten our path that leads towards our goals.