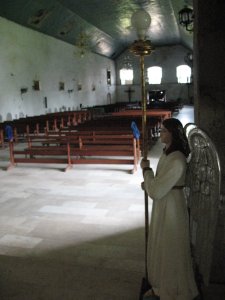 We are fascinated by angels. One of fastest growing businesses today is the angel industry: specialty stores that sells pictures, statues and cross-stitch patterns of angels. In the last few years until the present, we also see the rising popularity of guardian angels: it is claimed that we can know our guardian angels by birthdate. However, the Church has never defined this belief that every individual soul has a guardian angel; thus, it is not an article of faith. In other words, you will not cease to be Catholic if you do not believe it. The belief has not been declared binding for all Christians or has not been definitively proposed for the assent of the whole Catholic Church. It is, nevertheless, in the mind and tradition of the Church as St. Jerome said, “How great the dignity of the soul, since each one has from his birth an angel commissioned to guard it.”

Historically, the belief in angels appears in most, if not all religions. We have the kuribu of the Acadian culture, the angels of Assyria (an angel decorates the Assyrian palace, now displayed in the British Museum), Babylon (Nebuchadnezzar’s father believed that a cherub had been sent to make his work succeed) and Persia. We have the Jewish angels in the Old Testament: the cherubs of Genesis who guard the entrance to Paradise, the angels of Lot who delivered him, the angels of Moses whom God promised to go before him, the cherubim of Ezekiel (angels of fire with the face of animals), the seraphs of Isaiah who sit on the throne of God, Rafael who cures Tobit. In the New Testament, we hear of Gabriel at the Annunciation. And Michael in the book of Daniel, Revelations and the Catholic Epistle of St. Jude. Finally, the individual guardian angels who appear during the Middle Ages. Moreover, there are many kinds of angels: the good angels and the evil angels like Lucifer. There are even hierarchies of angels: from the seraphs who sits on the throne of God to the cute little angels we all love.

However, the archaic concept of an angel is simple but profound: they are units of the presence of God in the world. Since God is unfathomable, we cannot see Him. But we can see ‘angels’. Thus angels are sensible and palpable manifestation of the presence of God. When we say, “You are an angel to me!” we are saying to the person that he or she has manifested God to us. Through the person, the beauty and goodness of God has been revealed to us. The Greek, anguelos means messenger. Angels are thus messengers of the presence of God in what is beautiful, what harmonizes, what unites, what is good, what heals, what is virtuous, what gives us hope, what makes us happy (notice angels sing in choir!).

*the angel in the picture has been in the old tabernacle in the Parish of St. John the Baptist in Camalig, Albay, my hometown.