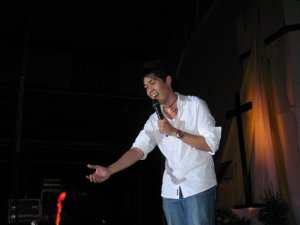 Wesley Snipes before becoming famous worked as a parking assistant at Columbia University. Whoopi Goldberg was a bricklayer on a San Diego Zoo construction project in California. Then she become a make-up artist for corpses at a funeral home. She said, “Death puts a lot of things in the right perspective. Race and class cease to matter. And if there is no disfigurement, the face of the dead person often looks very peaceful. It was a kind of privilege to make them look their best for their friends and families.” Before Chris Tucker laughed his way to the bank, he didn’t laugh at his former work: cleaning the floors and restrooms of a fastfood restaurant. Nora Aunor sold water at the train station in Bicol before water became a commodity in bottles. Marvin Agustin and Diether Ocampo were once waiters. Raymond Sajor was an unknown from Lucena City before he joined Philippine Idol, got eliminated early, but grabbed a much bigger trophy at the 11th World Championships of the Performing Arts in Hollywood. Or, the UP Pep Squad who won the championship of the Cheerdance Competition this year after months of practice and sacrifice.

These famous artists illustrates the simple yet practical point of the Gospel: Before we are entrusted with bigger things, we have to start small. The maxim is very important for many Filipinos. We like to hit it big right away. Many are called one-time big-time millionaires: once they get their pay check they splurge.

But life teaches us that the best way to the top is the incremental process: hinay-hinay pero kanunay (slowly but surely). Many would like to start a business, but couldn’t because they wait for big-time financing. Small business magazines and books like “Rich Dad Poor Dad” and “The Millionaire Next Door” tell us that small businesses can be started with nothing. The requirement is that we possess a marketable skill, a potential client and the guts to creatively market ourselves. Bravery is key in one’s incremental climb to the top. In other words, it is ok to start from the garage of the house, or for many Filipinos, from our window with a few items for a sari-sari store.

The same thing with building our character. The Gospel tells us, “the person who is trustworthy in very small matters is also trustworthy in great ones and the person who is dishonest in very small matters is also dishonest in great ones.” We are all called to grow, and as St. Paul would say, “to advance”. But any growth is a journey towards God. Thomas Aquinas (1225-1274) said: “To stand on the way of the Lord is to move backwards.” For Christians, the journey to the top of the ladder is the climb towards God. The journey towards God means choosing the right road or the correct way to get there. Choosing the right way is choosing to live according to a virtuous life. And living the virtues is a process that involves little successes and often big pitfalls. Like forming a habit: all we have to do is practice one virtue at a time for 30 days. Conversely, a vice is practiced 30 consecutive days for it to become a habit. Thus, if one is to build character for greater things, we start building small and slow, brick by brick, one at a time.

You can therefore see with the ZTE scandal involving top government officials that grace Philippine headlines today: they did not begin to be corrupt NOW. I bet they began cheating way before they became famous.

*Mr. Raymond Sajor at the Diocesan Youth Assembly. He sings today Sunday at the UP Church, 11:00 AM Students’ Mass. The UP Pep Squad also thanks the Lord for winning this year’s UAAP Cheerdance Competition at the Araneta Colliseum.