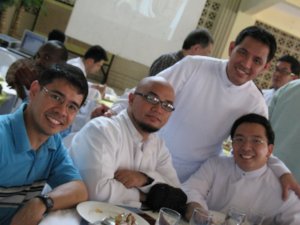 If you were given a chance to bid a loved one goodbye shortly before you die, who would you call, and what would be your message? This sounds like one of our usual beauty contest questions for the question-and-answer portion, but for the 2,800+ victims of the 9/11 attack on the World Trade Center which we remember today, this question is what they actually faced. Minutes before the crash, passengers on the plane and those at the burning building were able to call who mattered to them. At the end of the day, what matters is whom we love.

The Gospel today names Jesus’ friends whom He chose to accompany Him in His ministry. After His resurrection, He hoped that they would continue His work on earth. Eventually, these friends of His strived to be one with Him at all times. Paul was one of the disciples who introduced Jesus to many others especially to the Gentile world. In his letter to the Colossians, Paul reminds those who received Jesus, that they share in the fullness of Christ. That they are to “walk in him, [be] rooted in him and built upon him and established in the faith.” In other words, Paul exhorted the Christians to be one with Christ. To be one with Christ establishes a relationship of friendship, just as He had said, “You are not anymore slaves, but My friends.” At the end of the day, what matters is whose heart binds ours.

When St. Ignatius realized that his men will have to go to faraway places, he encouraged each one to constantly communicate through letters. These letters kept them together though dispersed. As St. Francis Xavier traveled to India and the Moluccas, he would cut out their letters and placed them closed to his heart.

In all these, we get to see something: love drives, animates and moves us. The love of Christ for His disciples became the inspiration and life-giving force for them to continue His work until their last breath. In turn, the love of the disciples for their specific community enabled them to undergo countless sufferings as Paul experienced in his travels. Succeeding generations of saints would encourage the union of minds and hearts among their community members while on mission. And what moved the people to call their loved ones minutes before their death, professing their love for them, was the human spirit’s seeking for union.

Perhaps today we can look at the ties that bind us. Are their relationships that need strengthening? Or we can ask the same question the victims of 9/11 faced. The people that comes to our minds are the people who matter to us. Are we spending quality time with them? Or, are we spending a lot of our time with people who are not as important?