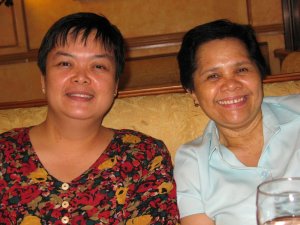 Let me first explain the celebration today. For Catholics, the Assumption of Mary flows immediately from the belief in her Immaculate Conception. First of all, we believe that death is the consequence of our sins. In his letter to the Romans (6:23), Paul said, “For the wages of sin is death, but the gift of God is eternal life in Christ Jesus our Lord.” Since death and sin are the fruits of Satan, thus Mary’s freedom from the original sin of Adam frees her from the consequences of sin also: death. The second reading verifies this: “For just as in Adam all die, so too in Christ shall all be brought to life.” Since she would not experience death like us, then her assumption to heaven is thus a result of God’s gift.

Second, the Immaculate Conception is a belief that through God’s grace, Mary was conceived without sin. If Mary was conceived without sin, then she would not experience death — like us. Her assumption into heaven is thus a result from this freedom from sin: immediate union of her whole being with Her Son is given her at the end of her life. From the apocryphal treatise, De Obitu S. Dominae, in the 4th-5th century, the Assumption of Mary has been celebrated. In November 1, 1950, Pope Pius XII declared infallibly ex cathedra: “Mary, having completed the course of her earthly life, was assumed body and soul to heavenly glory.”

We do not know the exact time, date and manner of how she died. The same thing with Our Lord. December 25 is not exactly the birth date of Christ. But what then do we celebrate? We celebrate the belief that Mary was assumed into heaven; as well as on December 25 we celebrate the truth that Jesus was born on earth. It is like this: My mom’s birth date is January 24, but when it falls on a weekday, we celebrate it not on the day itself, but on the nearest Sunday. The essence of the celebration is still present.

Let us reflect on a certain aspect of the Assumption. The belief on the Assumption of Mary gives us a sense of our destiny. Through the grace of God, all those who are obedient and faithful to God will also be united with Him like her. We were meant to be united with God. To us, death is not an end or extinction but a transition to a better life. And second, Mary becomes an example to be imitated. If a human being, like Mary, is able to be faithful and obedient to the will of God, so can you and I. The life of the ‘cloud of witnesses’ (the saints) is evidence to this belief. The lives of many of the faithful who believed in the Assumption are testimonies of this. You get to see the truth in the lives of people. Just as the truth of love, which cannot be empirically tested, is verified by the lives of lovers.

Does your life attest to a truth? If you were asked to give a statement that would embody your life, what would it be? For example, some people adhere to the truth that “Family is first.” So, in conflicting schedules, they decide in favor of family time. They put primacy over coming to Sunday mass with the family, dinner together at home and finding time to pray together. They mark with a special celebration important events like birthdays and anniversaries.

Similarly, what truth in our faith do you live by?