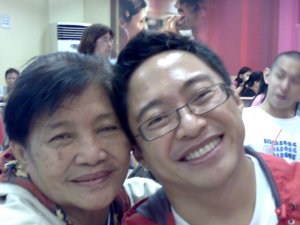 At the end of the Gospel, Jesus tells the woman, “O woman, great is your faith! Let it be done for you as you wish.” And her daughter was healed from that hour.

One of the most powerful scenes in the musical, Miss Saigon, is when Kim (played by Lea Salonga) sings to her son, “I’d Give My Life For You”, so that the father, Chris, an ex-GI would provide a much better life for the child. The show’s inspiration was reportedly a photograph which producer Claude-Michel Schönberg found in a magazine. The photograph showed a Vietnamese mother leaving her child at a departure gate at Tan Son Nhat Airport to board a plane bound for the US. This action was for Schönberg “The Ultimate Sacrifice” the central idea in the plot of Miss Saigon. An excerpt from the lyrics of the song goes this way:

You will be who you want to be.

You / can choose whatever heaven grants.

As long as you can have your chance

I swear I’d give my life for you.

No one can stop what I must do.

I swear I’d give my life for you.

A mother will do everything for her children. I have seen that with my mother. I have witnessed that with many mothers who have given all their love and their lives for their children. The Canaanite woman’s love for her daughter is no different from many mothers we know. She will do anything, pass through anything just to have her sick daughter healed. She cried out to Jesus, “Have pity on me, Son of David. My daughter is tormented by a demon.” In the time of Jesus, all illnesses were believed to be caused by evil spirits.

Let’s see what she went through:

First, Jesus ignores her. He does not say a word (v. 23) in answer to her cries. This is the first rejection. We are hurt when someone ignores us. Even in prayer: if we feel that we do not get an answer from God, we easily give up. The Canaanite woman does not.

Second, Jesus’ disciples are annoyed and would like to send her away because she keeps on calling out to them. This is the second rejection. We are deeply offended when the person we need pay no attention to us, and worse, when his or her staff joins the bandwagon. If you find yourself in this situation — like an office or a bank— what would you do? Would you walk out of the door, and completely give up? Even in prayer: after all your novenas and candles to all the saints, what if you didn’t pass the bar exams or the most desirable thing you prayed for was not granted? Some people I know stopped coming to mass. Would you harbor a grudge against God? The Canaanite woman does not.

Third, Jesus says, “I was sent only to the lost sheep of the house of Israel” (v. 24). You see, the Canaanite woman is a Gentile; she is not a Jew. If you are told that you cannot join a group because you don’t belong there, would you storm out of the room? Will you throw a tantrum and begin dropping names of influential people you know? The Canaanite woman does not.

Finally, Jesus said, “It is not right to take the food of the children and throw it to the dogs” (v. 26). If someone calls or insinuates that you are a dog or says, “Hayop ka!” will you be insulted? And when insulted, will you finally resign and forget what you most desire? Having the insult as the last straw, the Canaanite woman would just have given up. After all, this was a great insult. She must have some self-respect left. But she does not.

The more the mother cries out, “Even the dogs eat the crumbs that fall from their master’s table.” In other words, she was saying, “Yes, I can take that. I know I am unworthy. I am not at par with the others, but please, heal my daughter.” The Canaanite mother was willing to take insults for the sake of her daughter. Kim would sing centuries later, “I swear, I’d give my life for you.”

This show of great faith puts us to shame. We would have given up long before the final straw like ‘people of little faith.” That is why Jesus says in the end, “O woman, great is your faith! Let it be done for you as you wish.”