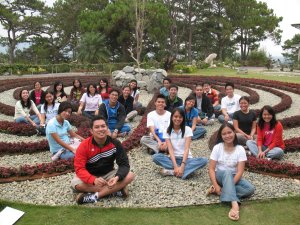 There are things we do in our ordinary lives; some ordinary things; mundane and banal. Like walking to the jeepney stop or to the shopping center. Washing our clothes, cleaning our rooms or reading our textbooks. Some things you would not pay a lot of attention as throwing garbage or carrying our back packs. But the Gospel tells us that we need a special kind of eye, a special way of hearing, a special way of speaking to see God working in these ordinary things. It takes another special language to speak about these depth experiences, like the language of imagery, metaphors or parables. In the contemporary world, we evoke imagery and metaphor to communicate the most profound and most richly developed sense of experiencing the fullness of life. These images point past their very object to the very ultimate truth which must be told: that life does not have one absolute and fixed meaning. A photograph of the wedding of my parents may have different meanings for me or for my friends or for someone who does not know me. We are able to experience something beyond what we see. Haruki Murakami’s book, Kafka on the Shore, affirms that life is a big metaphor.

One of the most important things in life is an experience. Certain experiences cannot be completely explained or described. And how to communicate these profound experiences become very challenging. That is why Jesus used metaphors and parables to explain the Kingdom.

In the 1960s, Simon and Garfunkel was propelled to popularity by a song called, “The Sound of Silence.” Paul Simon wrote the song in the aftermath of the assassination of President John F. Kennedy on November 22, 1963. He wrote the song to capture the emotional trauma felt by many Americans left by the sudden death of a vigorous and visionary leader. The song reached #1 in the charts on New Year’s Day in 1966. The some of the lyrics of the song holds the same meaning as that of the Gospel:

And in the naked light I saw
Ten thousand people, maybe more
People talking without speaking
People hearing without listening
People writing songs that voices never share
And no one dared
Disturb the sound of silence.

In other words, the Christian is called to have depth. Hindi mababaw, kundi malalim. Someone who can see reality in the eyes of God. Someone who could read between the lines; see meaning beyond the ordinary things we do. Someone with a special ability: to see beyond what one sees; to hear beyond what one hears; to speak about the mystery of life. Or perhaps, the deepest is when one can communicate without speaking (as lovers do with their eyes or with their intuition or with their hearts), one can hear another without their using their ears (as lovers again do). When one is at home with silence, you get to hear the voice of God. Loud and clear.

*the labyrinth at Mirador Jesuit Reatreat House in Baguio City. The Labyrinth leads you towards its center. The labyrinth is used for prayer.