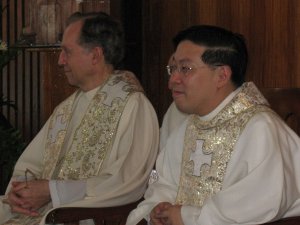 The beginning of chapter 12 of Exodus tells us the origin the feast of the Passover. It came after the announcement of the final plague, the plague of the firstborn. Originally, this feast was a nomadic spring festival which Israel reinterpreted as a memorial of God’s saving act to Israel’s slavery. During that time, the Israelites believed that blood was the contribution of a deity to the sacrifice. Thus, smearing blood on the doorposts and the beams, holy places of the house, would protect the household from the destroyer or the angel of death. The feast must be eaten hastily for the immediate march out of Egypt. Thus, the Passover Feast means that the Lord has ‘passed over’ the houses of Israel during the plague. In the first reading, it was the Lord who ordained this feast; who commands Moses and Aaron, and who is worshiped by the people. The Israelites followed the Lord instructions; Moses and Aaron followed suit.

On the other hand, the plagues have been wrought because the Pharaoh did not obey God’s instructions given to him by Moses and Aaron. Pharaoh would not bow down to God; moreover, grant permission for the Israelites to leave.

Thus, to those who obeyed, freedom was granted; to those who didn’t, experienced God’s judgment. The Israelites made history; Pharaoh and the Egyptians became history.

However, our struggle is not so much finding God’s will; but obeying God’s will. We obey only if it conveniences us. If we honestly look back at our lives, we spend more time resisting God’s will, than obeying them. When we sin, we find ourselves yielding to it, than resisting it.

Think about this: if people would just obey the traffic light, our life would have been better — there would be no accidents. On the other hand, try to break rules in school: either you are expelled or you are suspended. In other words, when we obey, the angel of death passes over us. Thus, no deaths; no accidents; no misbehavior.