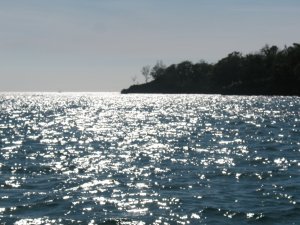 The Gospel begins by telling us that Jesus revealed himself to his disciples in this way. He appeared at Lake of Tiberias while his disciples were on the boat fishing. He told them to throw their nets and they had a great catch. Like the first time He called them. Then, He prepared a fish-and-bread breakfast, took them and gave it to them. Like the way He used to do.

Second, we use familiar images. When we talk about our vocations, we use the image of the fishermen at sea and Jesus words, “From now on, you will be fishers of people.” When we talk about service, we use the image of the shepherd and His sheep. After being assured of Peter’s love, Jesus entrusts His sheep to him. The guiding image is that of a shepherd willing to die for his flock.

We reveal who we are by the things we habitually do. The TV series, Heroes, tells us that we are creatures of habit. We become what we repeatedly and frequently do. The remembering is a guiding light to us. We learn from our parents: the way they took care of us, sometimes becomes the guide on how we take care of our children.

In your life, how do you want people to remember you by? Perhaps, it is better to bring this question to a higher level. Some people choose their advocacies and are known to be experts in a specific area of concern. They don’t spread themselves thinly by becoming involved in thousands of causes.

There are many issues in the world that needs support: environmental issues such as global warming and biodiversity; economy and trade issues such as causes of poverty and foreign debt; human rights such as women issues and rights of indigenous people; geopolitics such as the war on terror; or health such as AIDS and global diseases.

Perhaps the modern way of becoming fishers of people or shepherds of a flock is simple. Jesus is the unchanging principle that we go back to. The Holy Spirit enables us to remember Jesus. But the way or the technique to become like Jesus in the modern world is up to our creativity — assured as the song from the movie, The Cardinal, that every path leads to Him.